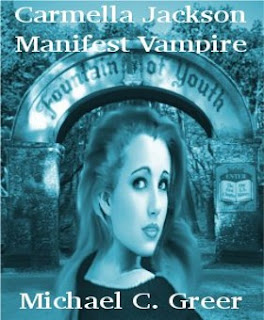 
Meet Carmella Jackson, a young woman in St. Augustine Florida, who is attacked and is tranformed into a creature of the night. She has to deal with her friends and family while she learns about the other world that inhabits this lush and historic beachside town.

Written for everyone to enjoy, this is a new twist on the vampire mythology.

"This book is not a dark complicated thriller peopled with unpleasant characters. If you are tired of explicit sex and violence that does nothing to move the plot along, and wading through a confusing mess of extraneous characters that have nothing to do with the story, you may enjoy "Carmella Jackson: Manifest Vampire" by Michael C. Greer,I did!

I suspect it is written more for teens and I am pushing 70, but I found it a light refreshingly well written story composed of fantasy, light romance, and mystery."--Amazon Reviewer


Carmella Jackson's boyfriend, Charlie, is just a normal guy in the last summer after high school spending his days at the beach in Saint Augustine in Florida. While everything else is going great in his life, his girlfriend is beginning to act strange. This is the story of his discovery of the strange and terrifying transformation of the love of his life.

This one spins off from his original novel and comes from the POV of Carmella's boyfriend who learns his girlfriend is a vampire. Not something that's usual for a teenager looking for a future. It doesn't spoil the original story for readers who haven't read that and it gives a clue into the mind of a boy who must learn to cope with some pretty weird things.

I found it interesting, a quick and easy read and fun. For those who have read Mr. Greer's original story about Carmella, they'd enjoy seeing how Charlie reacts."--Amazon Reviewer
Posted by Holly Hook at 8:00 PM