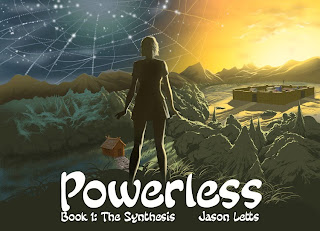 Powerless: The Synthesis (Book One) by Jason Letts

Mira Ipswich couldn't have ever known the startling difference that separates her from the rest of humanity. But when she discovers a strange anomaly in the midst of her seclusion, her parents are forced to reveal she exists in a world where everyone is imbued with a wondrous natural gift. Everyone except herself that is. Accompany Mira as her attempts to fit in among peers and understand her inconceivable condition embroil her with the dangerous forces threatening her homeland. Protected by nothing more than her imagination and ingenuity, you'll never find a superhero more like you.

The first book in the Powerless series is the tale of Mira’s turbulent and perilous entry into the world around her. And once she’s a part of it, nothing will ever be the same again.

Edited by Chuck Wightman, the story is already raking in the awards. It's won the Webb Weaver 2010 Writer's Competition, the judges proclaiming they were "entranced by the writer's ability to bring together this unlikely group of kids," and that the book could "be a hit in the YA book world." The story is a roller-coaster ride filled with lots to discover in an ever-expanding world, a set of diverse characters, and their deepest hopes and aspirations. If you like stories with plenty of dramatic twists and spirited intensity, it'll have you falling in love with a brand new series and begging for more!

"Take your typical fantasy novel -- where the hero discovers she has mystical powers and must save the world -- and turn it on its head.

With "Powerless" the author has created compelling characters and a fascinating setting with a twist: the main character is the only person without a special power! In a world where every person has an extra ability of some sort, Mira is exceptional in that she has none.

I could not stop reading this book. The story pulled me in and kept me riveted right through to the end. Jason Letts does a fantastic job of introducing new mysteries and challenges while keeping the characters and their interactions believable. I particularly enjoyed how the story began with Mira's entire world limited to her parents' house and the surrounding yard. Then throughout the story the camera pulls back to reveal more and more of the world and its intricacies.

I'm waiting impatiently for book two! If you're looking for something different, or if you're just looking for a great story with interesting characters I highly recommend this book." 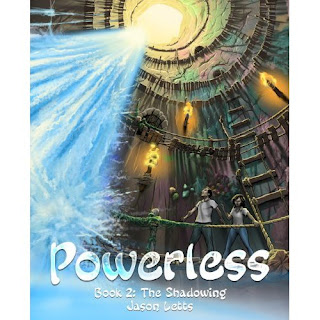 
If you were sent out into the world to learn of its evil, what would you expect to find?

In book two of the Powerless series, Mira and her friends must endure a period of apprenticeship, known as The Shadowing. This is their last chance to prepare themselves before they are thrust into the mysterious war, which no one seems to know anything about. While Vern, Aoi, Will, and Roselyn seek out pre-arranged mentors to help them develop their unique magical abilities, Mira—the only one without a power—sets off in search of the brilliant author of her science manuals, Flip Widget, who she learns was the doctor at her birth. For all they have to fear that waits for them in the future, they will find that the troubles they prepare for are much closer at hand than they think.

"Just as before, the author leaves us hanging a bit at the end, just enough to make us shout "When is the next one coming out?" This is definitely a series to watch!
I give this 4.5 /5 stars (rounded up to 5)" --Amazon Reviewer 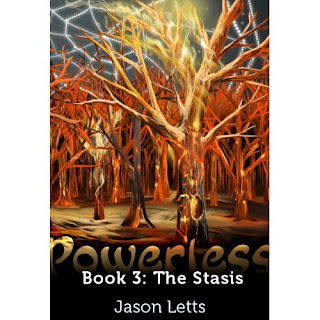 
In book three of the Powerless series, The Stasis, Mira and her friends are assimilated into their nation’s military. As they endeavor to defend their homeland from a ruthless tyrant and his ravenous followers, Mira hopes to find what she has sacrificed so much to reclaim. Their mission becomes that much more difficult when they encounter their military leader, a man obsessed with the power of his position who proves just as life-threatening as their enemies to Mira and her friends.

Danger surrounding them on all sides, this small group of teens is forced to depend upon themselves for survival. They’ve known each other their entire lives, but under these harsh and desperate circumstances their bonds will be tested as never before. Whether struggling to cope with trauma or turning affections into fledgling romances, they will all learn something different about living in the world when every breath could be their last.