Bargain eBooks #64: The Guns of Mars by Martin T. Ingham 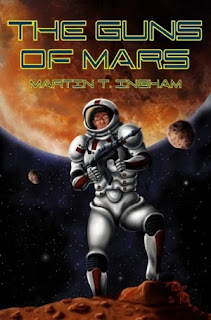 The Guns of Mars by Martin T. Ingham

Genre: Science Fiction
Price: $3.89
Where to Get It:
Amazon.com (for Kindle)

As science-worshipping totalitatians seek to overtake Mars, a defiant patriot stands alone against a corrupt system in THE GUNS OF MARS.

Morgan Asher never wanted to be part of the Martian colonization effort, but agrees to leave Earth for Mars to fulfill his wife's lifelong dream. After arriving on the Red Planet, Morgan discovers a sinister plot: Scientific Fundamentalists (Scifes) have infiltrated all levels of colonial society, and they hold a deadly weapon in their arsenal—one capable of rewriting a person's thoughts and desires.

Out of time and out of luck, Morgan must find a way to expose the enemies of liberty before their conquest of Mars is complete.

"The Guns of Mars shows us a different side to space colonization. It follows a young couple going to Mars who get caught up in a power struggle they had no idea existed. They end up having to do some pretty amazing things just to survive.

Maybe I'm reading things into this, but it seems a lot like a political thriller as much as science fiction. You have science worshippers who want to control everyone's lives through government and technology. The United States is portrayed in a very positive and optimistic light, while Europe is shown to be a strictly controlled regime ruled by a coalition government called "The Consensorate" (interesting name). I don't know if the author intended it, but it seems like Glenn Beck listeners would enjoy this book a lot.

Besides the political stuff, the author adds in a lot of futuristic technology along with enough real science to make you believe this could really happen. There are some good action scenes to spice things up, and the characters are well written so you know what they're all about. It is very compelling!

This is definitely one of the better novels I've read recently, and I highly recommend it."--Amazon Reviewer


"The richness of this concept and the atmosphere of the desolate Martian landscape make this story stand out, and keep it from becoming "mere plot" even as the pace starts to rush toward the end. Highly recommended for fans of thrilling and thoughtful science fiction."--Amazon Reviewer
Posted by Holly Hook at 8:00 PM