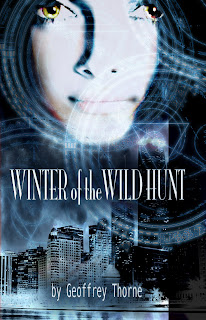 Winter of the Wild Hunt by Geoffrey Thorne


An aimless young man with a broken heart… four former child prodigies with a earthshaking idea... an amateur musician who is considerably more than she seems and an unearthly force capable of ripping people right out of this world come together in the swirl of magic and science that is WINTER OF THE WILD HUNT.

Sharing a home with four super geniuses isn’t easy, especially if you’re worried the machine they’re building in the attic might just destroy the planet.

When a beautiful singer with a voice that’s literally out of this world smashes into your life like a freight train all hope of normalcy goes right out the window. Suddenly you’re changing for her. Not only your mind but your body is changing into something new, something alien, something inhuman. You find yourself at the center of a centuries’ old conflict between all of mankind and mystical forces too powerful and malevolent to contemplate.

When you realize the fate of two worlds rests on which side of the conflict you choose you know whatever you decide could spell oblivion for billions including your best friends and the woman you’ve come to love.

WINTER OF THE WILD HUNT is a tale of magic, science, friendship and a love so terrible it just might break the world.

"The opening notes of "Winter of the Wild Hunt" present a hint of "Weird Science", but the accompaniment layers mystic folklore and Worlds of Old. The duet of a young man's heart and a restless,searching soul of possibilities drive the story's song until the crescendo of science, magic and choices collide. With mysterious flourishes, the storyteller leads you down the path of The Winding Road, while the music of the tale hauntingly dances in the air, spinning past and present together. This is a score that, when the last note is played and hangs in the air, its resonance will leave you pondering the vastness of it all. As the pen of the storyteller comes to rest, like the conductor lowering his baton, you will be compelled to rise from your seat and call out an admired, "Bravo!"."--Amazon Reviewer 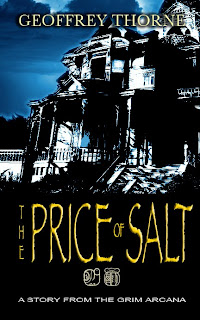 The Price of Salt (The Grim Arcana #1) by Geoffrey Thorne

What if, when your parents told you there was nothing in the dark that could hurt you, they were wrong? What if there's something there that can hurt you, kill you, chew you up and swallow your soul? What if that something has an address, a house where it sits in the shadows, waiting for someone, anyone, to stumble inside? What if that someone is you?

It's hard enough being a tough guy in a city like Arcana where magic is a real as a bullet to the forehead. When you have to be tough enough to walk into a house that eats souls the way kids eat hard candy, well, there's tough and then there's tough.

Hardboiled fantasy and horror from the author of THE COST OF OPENING.

"The Price of Salt is an interesting and creative novella in the dark fantasy/horror genre. The narrator definitely sounds like a hardboiled detective, but this guy is more interesting than an every day detective. This guy has to fight evil magic. I liked that although this is a horror story and there were some scary elements, there wasn't a lot of gore. I preferred to be scared or captivated by a story rather than grossed out by it. Of course, I'm not every reader so this is just an FYI.

I also really liked how the story got its title. It came full circle at the end and I liked that."--Amazon Reviewer
Posted by Holly Hook at 8:00 PM