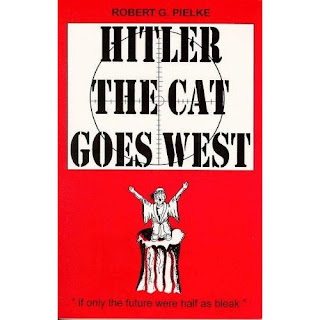 
It’s 2090 A.D. The United States of America ceased to exist twenty years earlier, after the Supreme Court declared all who participate in an abortion subject to the death penalty. The six fragmentary nation-states that emerged out of the violence following from the Great Dissolution, are just now being forced to contemplate a reunification. All of the so-called heads of state are being systematically assassinated, and a militant religious group, the True Way, seems to be responsible. They have never concealed their desire to forge one theocratic union extending across the entire North American continent. In order to avoid the chaos that threatens to break out again as a result of the assassinations, most of the new nations are submitting to a reunion.

Hired to perform one of the remaining assassinations is one “Hitler the Cat,” who has motives of his own to dispatch the reigning Bishop of the Republic of Southern California. However, things do not go as planned. Instead, a revised scheme brings together an unlikely band of conspirators who manage temporarily to convince the masses throughout the world that they are witnessing the Second Coming of Christ. But it’s not the Christ they expected. Rather, this particular Christ is a drug-addicted midget of Japanese ancestry, and his life expectancy is not overly long.


"I wasn't so sure how I felt about the book in the very beginning. I actually found myself to be confused at times because of all the characters and all the conspiracies, etc. But I quickly made sense of everything and greatly enjoyed the book. I thought the schemes were brilliant, and the writer did a great job. The entire storyline was well thought out and creative. Loved it."--Goodreads Reviewer

"Received from Goodreads. It was a weird, fun read - just what I was in the mood for."--Goodreads Reveiwer
Posted by Holly Hook at 8:00 PM