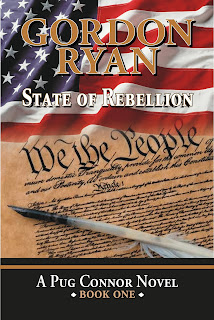 State of Rebellion: A Pug Connor Novel (Book One) by Gordon Ryan

Daniel Rawlings is a twelfth generation American whose ancestors fought in the Civil War and aided in the settlement of California, Padraig "Pug" Connor is a Marine Corps colonel who is assigned by the president to investigate the secessionist movement in California. With a growing economy exceeding that of many third world nations, an independent Republic of California could become a major economic and political player on the world stage. When the Western Patriot Movement becomes involved, insurrection is at hand and America is not the land our Founding Fathers intended.

"One of the most releastic pictures of the issues that trouble westerners that I've seen." Jenny Hansen, Meridian Magazine 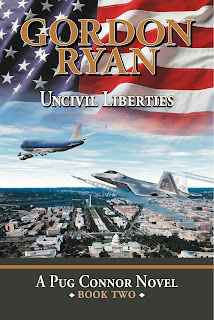 On inauguration day, 2013, President Clay Cumberland assumes office and is immediately advised that a hijacked commercial airliner is headed for Washington D.C. He has only two choices: allow the plane to choose its target and potentially kill thousands of people on the ground, or authorize the Air Force to shoot down a civilian airliner and kill 350 innocent people. Either answer could end his presidency.

At the direction of the president, Marine Corps General Pug Connor's task force, code named 'Trojan,' faces domestic terrorism on a scale unimagined . . . and some of the terrorists are Americans. Congress panics, passing the expanded Domestic Tranquility Act, approving unprecedented authority to law enforcement and private security corporations. Everyday Americans learn the cost of freedom versus security. And when a nuclear disaster dwarfs the events of 9/11, America runs rampant with Uncivil Liberties!

"With this second book in the Pug Connor series, novelist Gordon Ryan continues to deliver a tightly written story with believable plot, likable characters, and page-turning suspense that will keep you reading far into the night."--Amazon Reviewer
Posted by Holly Hook at 8:00 PM