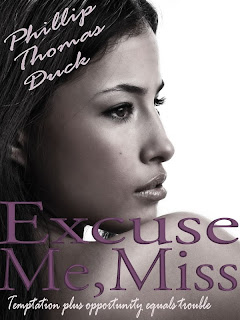 Excuse Me, Miss by Philip Duck

How well do you trust your partner?

“Fidelity anthropologist”, sexy decoy to most, Victoria Frost will discover the answers you seek…

The night it all begins to change for Victoria Frost is no different than usual. She spends it seducing another woman’s husband. Handsome, charming, intelligent, any woman would be attracted to Benjamin Kingston. Victoria eases up beside him and lingers there like too much perfume. And that quickly, for him, his wife is forgotten. The ensuing conversation is an erotically-charged game of cat and mouse. Where will it lead? In EXCUSE ME, MISS hurtling events and richly drawn characters collide in a sexy story of betrayal, the desire for loyalty, and the consequences of unfaithfulness. One woman’s determination to uncover the truth for badly broken wives instead unleashes a host of personal dilemmas, and in the end the truths she discovers are mostly about herself.

"I loved the premise for this novel. A sex decoy, testing the fidelity of married men. Excuse Me, Miss was a well-written and quickly engaging novel that deals with loyalty (or not) in relationships and its ultimate results. Highly recommended."--Amazon Reveiwer

"Great characters and an interesting story about having a job being someone you are not. I really enjoyed the pace of the book and the attention to details and fashion. A great value of entertainment."--Amazon Reviewer
Posted by Holly Hook at 8:00 PM