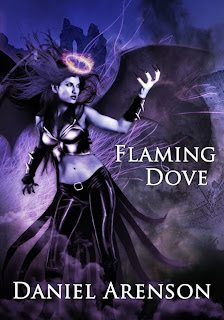 
The battle of Armageddon was finally fought... and ended with no clear victor. Upon the mountain, the armies of Hell and Heaven beat each other into a bloody, uneasy standstill, leaving the Earth in ruins. Armageddon should have ended with Heaven winning, ushering in an era of peace. That's what the prophecies said. Instead, the two armies--one of angels, one of demons--hunker down in the scorched planet, lick their wounds, and gear up for a prolonged war with no end in sight.

In this chaos of warring armies and ruined landscapes, Laila doesn't want to take sides. Her mother was an angel, her father a demon; she is outcast from both camps. And yet both armies need her, for with her mixed blood, Laila can become the ultimate spy... or ultimate soldier. As the armies of Heaven and Hell pursue her, Laila's only war is within her heart--a struggle
between her demonic and heavenly blood.

"A delightful read... hard to put it down." -- MotherLode Book Reviews
Posted by Holly Hook at 8:00 PM