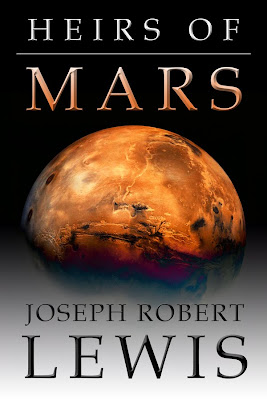 The dream that was Mars has become a nightmare for the children born there.

To save New Troy from falling birth rates, Asher Radescu secretly clones people in the back of his old truck. To save New Troy from despair, Claudia Cruz hosts the most popular racing show on two worlds. And to save the city from destruction, they’ll rally persecuted cloners, resurrected colonists, and racing celebrities to fight homicidal AIs.

HEIRS OF MARS follows the lives of six men and women through the final days of the first war on Mars, a war between humans, machines, and the resurrected souls who aren’t truly one or the other.

But even if they survive the war, there is no escape from the red planet.

"Joseph Robert Lewis has written a compelling book that follows the lives of 6 sentient beings during the days leading up to the end of the war. Each chapter tells a piece of the adventure from one of those beings' reference points. The chapters are clearly marked, and I found this to be a very effective way to give us a more complete picture of what was going on in the minds of the humans, clones and machines involved in this war. The premise of the story was really intriguing, and brought up some interesting concepts; cloning people minutes before they die to save their knowledge, machines that seem almost human and yet they're not, Mars being a viable habitat for people when Earth is not enough. With the changing viewpoints and the engaging concept, this was an easy book to get into."-Motherlode

"It’s a brilliant book, a compelling story, well-told. Lewis has two short stories set in the same world, prior to the action in the novel. Guess who downloaded them both? Guess who’s getting eyestrain again?"--Marian Allen
Posted by Holly Hook at 8:00 PM