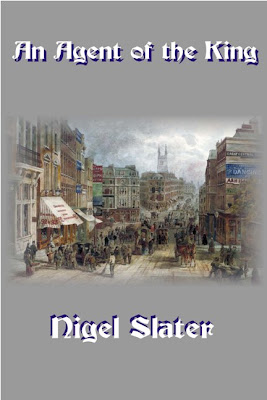 An Agent of the King by Nigel Slater


Archie Dexter, a hedonistic patriot becomes trapped in Egypt during Napoleon's invasion and plays a crucial role in the Battle of the Nile. Dreadfully wounded, he returns to England and joins the vicious, secret war against Napoleon's spies, moving rapidly from Spain to London, where he risks everything to save the life of King George. A gripping, realistic and at times bawdy adventure unfolds. A new novel by Nigel Slater.

"This is the first historical fiction novel that I am aware of from Nigel Slater, a chef and the author of many cook books sold be Amazon. It is set in the time of Lord Nelson, 1798. The main character, hopefully of a series, is Archibald Fitzwilliam Lewis Dexter. He is an agent for a clandestine British organization, who is posing as a surplus staff officer in Lord Nelson' fleet just before the British victory over the French in Egypt.

Naturally, Archie Dexter is involved in giving Nelson an assist, all the while tracking French spies. This carries him back to England and the hunt for the spy network there. Archie is wounded, of course, and must also escape the clutches of the fair, and unmarried, Cordelia Hendricks, who wants to thank him "properly" for rescuing her.

The plot is well thought out and moves along nicely. It is without those slow spots that make you wonder if the author really had the plot thought out before he started. Nigel Slater's "An Agent of the King" has everything you want in the start of a series, a likable hero, spy and counterspy action, a little bloodshed and a girl who is looking to catch and marry our spunky hero. Maybe in later books, we'll meet the real woman of his life.

I enjoy books of this genre, so once I started, I had a hard time putting it down. Too bad one has to work. It's an excellent read and the price is right."--Amazon Reviewer
Posted by Holly Hook at 8:00 PM