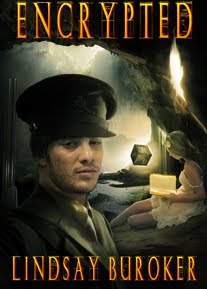 
Professor Tikaya Komitopis isn’t a great beauty, a fearless warrior, or even someone who can walk and chew chicle at the same time, but her cryptography skills earn her wartime notoriety. When enemy marines show up at her family’s plantation, she expects the worst. But they’re not there to kill her. They need her to decode mysterious runes, and they ask for help in the manner typical of a conquering empire: they kidnap her, threaten her family, and throw her in the brig of their fastest steamship.

Her only ally is a fellow prisoner who charms her with a passion for academics as great as her own. Together, they must decipher mind-altering alchemical artifacts, deadly poison rockets, and malevolent technological constructs, all while dodging assassination attempts from a rival power determined the expedition should fail. As if Tikaya didn’t have troubles enough, her new ally turns out to be exiled fleet admiral, Federias Starcrest, the man who recommended taking over her nation. To trust him could be a mistake; to fall in love with him would be a betrayal to her people, her family, and the fiancé she lost in the war. Those runes cloak more than mysteries, however, and he may be the only one who can help her unravel them before their secrets destroy the world.

"Encrypted (A+) is a fun romp, an adventure in the Lois Bujold Barrayar spirit, with a clear ending though ample scope for more and which I highly recommend if you like your sff fast, page turning with action, mysteries and a dash of romance."--The Fantasy Book Critic

"This is definitely not your run-of-the-mill, cookie-cutter fantasy--there are a few unique steampunk and sci-fi elements thrown in as well. The characters were fun (my #1 requirement in a book), and the action moved right along--fans of speculative fiction should not be disappointed! I'll be reading Emperor's Edge, the next book set in this world, for sure, and am looking forward to more from Ms. Buroker."--Smashwords Reviewer
Posted by Holly Hook at 8:00 PM