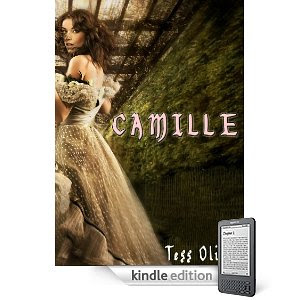 
At a time when society conforms to the strictest rules and most proper etiquette, sixteen-year-old Camille Kennecott and her guardian, Dr. Bennett, live a most unconventional life. They hunt werewolves.

When unwitting victim, Nathaniel Strider, wanders into one of their full moon pursuits, Camille and Dr. Bennett believe they have found a specimen for their study. Finding a scientific key to unlocking the mystery of lycanthropy would end their late night excursions. Yet beneath the irresistible exterior, Nathaniel is transforming into a flesh-tearing monster, and as each experiment fails, Camille loses another inch of her soul to him. In a month’s time, she must face the prospect of destroying the boy who has stolen her heart.

"I think Tess Oliver is a very talanted author & I hope to see more from her in the future. This is the second book, Safe Landing being the 1st, that I have read of hers & I really enjoyed it. I really felt what the characters where feeling & the way she describes things make you feel like you are there with the characters. This story was well written with very few errors in editing. That is one thing that drives me crazy. There were hardly any until about the last three chapters of the book. And they were minimal. The story is about a girl who hunts for werewolves with her guardian, her fathers best friend. They track them & kill them before they can hurt or kill too many people. Well, the last one she hunted & killed bit a boy, well teenager(18-19). And she tries to save him along with John her guardian. And in trying to save him they fall in love & they don't know if it's enough to save him from the monster that he is becoming. You will have to read it to see how it turns out. I highly recommend it."--Amazon Reviewer


"The thing about Camille was that it didn't focus on a pack of werewolves fighting over a girl. Thank God it didn't. Instead, it was about a girl (named Camille) who falls in love with a boy (named Strider) who has been bitten by a werewolf. Strider now has a month until he turns into a werewolf himself, and kills everything in his path. Unless Camille and her friend/gaurdian Dr. Bennet find a good cure for Strider by then, they'll be forced to kill him (did I mention that they're werewolf hunters?). Overall, this was a really good twist on the topic, and the fact that the book took place in Old England was even better.

The writng of this book was gorgeous, with discriptive language that made you feel like you were there. I'm glad that Tess Oliver didn't rely on just her topic to make the story good. She has some real talent."--Amazon Reviewer
Posted by Holly Hook at 8:00 PM