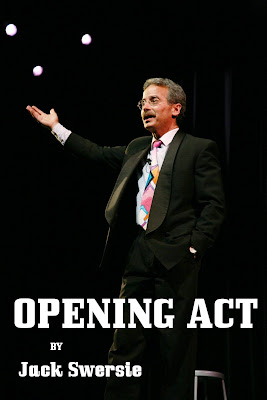 
"Opening Act" is the autobiography of an entertainer who never achieved huge show business success but made a nice living warming up audiences for over one hundred legendary concert stars of the 20th century. Comedian Jack Swersie shares his recollections of having worked with talent as diversified as Perry Como, "Weird Al" Yankovic, the Smothers Brothers, Tim McGraw, Ray Charles, Milton Berle, B.B. King, the Beach Boys, the Four Tops, and Joan Rivers among many, many others.

But OPENING ACT is not just about the great stars with whom he rubbed elbows. Putting his thirty-year career in perspective, Swersie shares the highs and lows of a show business journey where he was always the number-two man in a business where number-one reigns supreme.

Swersie tells it like it was. From his days as a young actor, through the comedy club era, and on to the dreaded Catskill Mountains. From a cruise ship performance debacle to his very successful national television appearances in the mid-1990's. From his first concert work in 1981 all the way up to 2010 when he began to experience what felt like (but may not be) the twilight of a long comedy career. Swersie takes the reader along on his emotional roller coaster ride through a tough business called "Show".

Show business, from the often humorous and sometimes bitter perspective of an entertainer who never reached the top of his game but always made a good living doing what he loves.

""Opening Act" by Jack Swersie is a interesting read about the Show Business we never get to hear about. Everyone knows about the "Big Stars", but when it comes to the hardest working people in Show Business, we know very little. Opening Act tells about what it's like to be a opening act for some of the biggest stars. Swersie bring to life the pressures and humor of warming up an audience for someone else. It's an easy & quick read that I found very, very interesting. If you like stories about this exciting business, I think you will love this book."

"As someone who's always been interested in show business, I found "Opening Act" to be wonderfully insightful. Jack Swersie gives the reader a refreshingly honest look into the world of comedy and proves that "there's no business like show business"!

"I thoroughly enjoyed reading this book by talented, show business comedian, Jack Swersie. What is is like to be an opening act for the biggest stars? A superbly entertaining & informative book, about dealing with stars, agents, audiences & landing those prime spots in the world of entertainment. Add a smattering of juicy tidbits, about various stars personalities & what it's like to work with them and their staff.... & you have an insightful, innovative & fun read. A compelling story into the world of what it's like to be the Opening Act."
Posted by Holly Hook at 8:00 PM