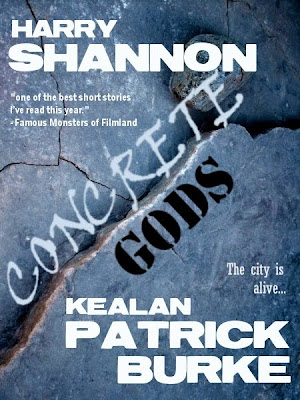 
What if life as you know it was a lie? What if the world was not truly ours?
What if there were old gods dwelling in the earth beneath our feet?

...And what if they came back?

From award-winning authors Kealan Patrick Burke and Harry Shannon comes a vision of the apocalypse that will make you question everything you thought you knew about the world in which we live. For a limited time, the 5,000 word story CONCRETE GODS is only .99 on Kindle and Nook.

Born and raised in Dungarvan, Ireland, Kealan Patrick Burke is an award-winning author described as "a newcomer worth watching" (Publishers Weekly) and "one of the most original authors in contemporary horror" (Booklist).

Although primarily a novelist, Shannon has sold stories to a number of genre magazines including 'Cemetery Dance,' 'Horror Garage,' 'City Slab,' 'Crime Spree' and 'Gothic.net.' Shannon's first signed limited edition short story collection 'BAD SEED' debuted in June of 2001. His debut horror novel 'NIGHT OF THE BEAST'--the first in a pulp trilogy set in northeastern Nevada--was released in 2002. The acclaimed 'NIGHT OF THE WEREWOLF' won the small-press Tombstone Award for Best Novel of 2003.
Posted by Holly Hook at 8:00 PM