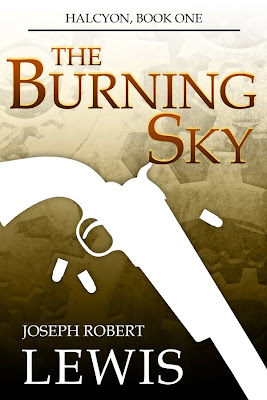 The Burning Sky by Joseph Lewis

THE BURNING SKY - Taziri Ohana is an elite airship pilot, though the long hours away from home have taken a toll on her family and she longs for a simpler life. When the Northern Air Corps is wiped out in a catastrophic fire, only Taziri survives to help the marshals pursue the suspects across the skies of Marrakesh. Their investigation reveals a vast conspiracy of deposed aristocrats, wealthy industrialists, and warmongers plotting against the crown. Taziri discovers that her own inventions have been perverted by the conspirators, the cities plunge into violent riots, and their only hope for salvation may be an exiled princess, her swashbuckling escort, and a crippled airship plummeting out of the burning sky.

"A great mix of intrigue, action and adventure. I'm already looking forward to more in the series." -- Goodreads Reviewer

"The best thing I can say at the moment is that I read this way too early. Now I actually have to wait around for the author to release the next books in the series to see what happens to some of the characters. The world is incredibly rich and almost seems designed from the best cultural eras for each geographic location. I truly hope he continues to explore the "what-ifs" for the rest of these cultures. Some of the characters tragically leave the story line too early for us to get to know them well, but I guess prequels could always pop up in the future. Looking forward to book 2."--Amazon Reviewer
Posted by Holly Hook at 8:00 PM