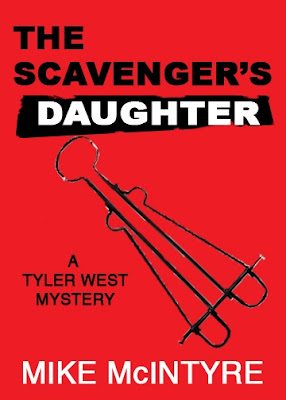 The Scavenger's Daughter: A Tyler West Mystery by Mike McIntyre

A modern-day Torquemada hell-bent on updating the Spanish Inquisition…

An investigative reporter racing to connect the lurid dots…

Deadline has a whole new meaning.

Tyler West, suspended Pulitzer Prize-winning reporter from the San Diego Sun, is desperate for a scoop that will save his career. Defying a spiteful publisher and a vindictive homicide detective, he investigates the baffling deaths of several of San Diego's powerful, rich and famous. Police call the murders unrelated, but Ty uncovers a common link: torture devices last used during the Dark Ages, including the Iron Maiden, the Pear of Anguish, and the most sinister of all—the Scavenger's Daughter. Ty is plunged into a mysterious world of medieval torture scholars, antiquities collectors, museum curators, and sadomasochists. Aided by photojournalist Melina "Mel" Koric, a former Bosnian War refugee, Ty must break the brilliantly conceived series of slayings that has cast a dark shadow over a city better known for its sun, sand and surf. The elusive killer goes by the name Friar Tom, in tribute to his hero, Tomás de Torquemada, the first Grand Inquisitor of the Spanish Inquisition. As Ty scrambles to unmask the monstrous zealot, he must juggle his investigation with his personal life: He pursues his lost love, Jordan Sinclair, an assistant district attorney, and continues to mentor inner-city kids at his youth golf clinics. With the city caught in an escalating nightmare of medieval mayhem, Ty is drawn into a lethal game of cat and mouse that could cost him everything.

"I read it in one continuous, thrilling five-hour session. It reminds me of my favorite crime series--the Alex Cross novels by James Patterson--only more compelling and convincing."

"...this book is a revelation. From Friar Tom and the Billboard Bandit to the irrepressible Ty West, I love these characters. And the plot device -- which I won't give away -- is nothing short of inspired."

"The Scavenger's Daughter is a hole in one. In addition to suspense, wit and golf wisdom, McIntyre tees up a beautifully nuanced romance."
Posted by Holly Hook at 8:00 PM