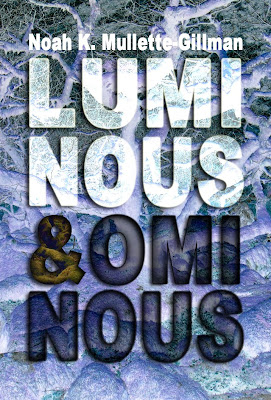 
If you had three days’ warning of the end of civilization and a safe place to hide:

What would you take with you? Who would you save?

And who would you leave behind?

Henry Willingham and his friends have three days to make the most terrifying decisions of their lives. The world has been infected by an inescapable living nightmare of alien vegetation that will replace all life on Earth. They must get everyone they love safely underground into a fallout shelter. There's not enough time. There’s not enough room for everyone. Who will they save? Who will they leave behind?

How will they live with the consequences?

After hiding underground for a year, the last three survivors must brave the otherworldly infestation and travel through what used to be upstate New York struggling for their lives and their humanity.

"I enjoyed Luminous and Ominous. The questions it poses are fantastic; who would you take and who would you leave behind in the last days of our invaded planet? When is it time to resist and when is it time to except those things one cannot change? The main character Henry wrestles with these very questions. We follow his journey through the days of the invasion of Earth by the beautifully described Cornucopia Blue. With subtle influences from H G Wells War of the Worlds it puts a modern slant on the fears that this type of invasion could conjure and expresses the emotional turmoil felt by the variety of characters. With beautifully descriptive prose and gently moving situations, we follow Henry and those he chooses to take with him through a well conceived journey through uncertain times. I live in anticipation of the next book which will hopefully round off Henry and Earth's journey to a satisfactory conclusion."--Pippa Boreham of Indie Fantasy Review

"The alien "invaders" of this unique science fictionish novel are exactly what the title tells us, Luminous and Ominous, a ravenous plant species with a mesmerizing beauty and a will to live as strong-or perhaps stronger-than any human survivor. And therein lies the problem for our protagonists: not just surviving in a new world, but preserving their very sense of what it means to be alive, and be human.
I'm a bigger fan of Noah K. Mullette-Gillman's second novel than I was of the first (and I'm a pretty big fan). The writing is as mesmerizing as the beautiful alien Cornucopia Blue it describes, and the characters' thoughts and struggles pull readers along with them just as surely."--Isabela Morales of The Scattering
Posted by Holly Hook at 8:00 PM