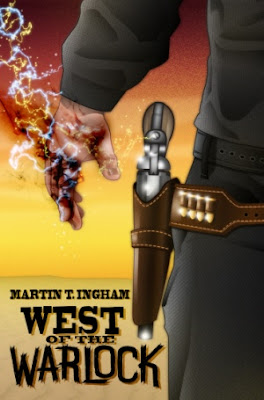 West of the Warlock by Martin T. Ingham

Nevada: 1882. Ron Grimes never wanted to be a law officer. This middle-aged dwarf came to the arid trading hub of Selwood to avenge his brother's murder, but ended up in the service of the county sheriff, who also happens to be a certified warlock. Tricked into Sheriff Doliber's service, Deputy Grimes finds himself pitted against one adversary after another, from pretentious elves to supernatural bandits, and a dark sorcerer whose abilities rival sanity. Throughout it all, Ron will learn what it means to protect and serve on the wild frontier, where guns and magic coexist and race relations take on a whole new meaning.
Posted by Holly Hook at 8:00 PM