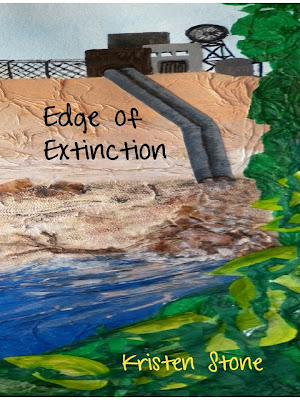 Edge of Extinction by Kristen Stone

“Once I thought I was a god, but now I know I’m not and I am glad.” So said Kianda Mala.

Kianda Mala came out of the jungle to find out why his people were dying. What he found was a world beyond his understanding. A world where men tore what they wanted from the earth and dumped what was left in his valley regardless of the consequences. A world where his people were deemed dispensable – they were simple, primitive, of no worth.

Trapped by the rainy season Kianda won the respect and trust of Hannah and Jon, a mining engineer, and they agreed to help his people. He impressed them with his insight into human nature and his skills as a hunter. Oh, and did I mention, he has a tail…

""Edge of Extinction" is a charmer. A story about a hidden Indian tribe in Brazil's Amazonian jungles is interesting enough. The fact that it is led by an unusual young man named Kianda Mala ("Mala" meaning "man" in the Chachinka language), the son of an English woman and a large monkey, makes it not only a unique story, but an unusual one. In most societies, an infant with a long, prehensile tail would be immediately killed as a demon. In this community, he is not only not killed, he is elevated to the position of Chaka (monkey god), and becomes the principle leader among his people.

This idyllic scene comes to an end when people begin dying, babies are born dead, and Kianda Mala discovers many dead fish floating downstream in the river that is their source of food and water. Seeking answers, Kianda Mala and two friends head upstream. Answers they do find, but they do not come easily. One of the men is shot to death, Kianda is captured, and the third escapes.

What becomes of Kianda Mala and his people? What do his captors make of this strange young monkey man? Surely such a being cannot be ... yet he is. Finding out what happens to Kianda Mala, his people, and the polluters is an adventure you won't want to miss. Heart-warming and at times poignant, it is one of the most enjoyable adventure tales I've read."--Amazon Reviewer
Posted by Holly Hook at 8:00 PM