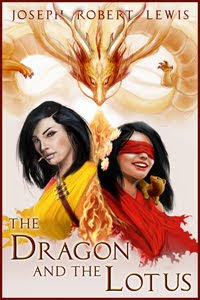 The Dragon and the Lotus by Joseph Lewis


As a child in Kathmandu, Asha was bitten by a dragon and gained the ability to hear the souls of all living things. Years later in India, she uses her strange gift and her training as an herbalist to save people possessed by ghosts, poisoned by legendary beasts, and tortured by the cruel doctors of Ming. And to fight the occasional bear or tiger, of course.

With the help of a beautiful blind nun and a sleepy little mongoose, Asha confronts both victims and predators, including the man who stole her childhood and killed her lover. But when she journeys into the west, Asha discovers that there are fates worse than death and there are human monsters that can only be defeated by a woman with the strength of a dragon.

"The Dragon and the Lotus is a tasty mix of historical fiction and fantasy, with just a touch of steampunk for flavor. I started reading it sort of idly on my lunch break, thinking it would be a pleasant way to pass the time. In reality, I spent the rest of the afternoon counting the minutes until I could go home and finish it. Each adventure the main characters get tangled up in is unexpected and well-balanced, set in a world so rich that I was continuously and pleasantly surprised by each new turn of events.

A fast, entrancing read that definitely left me hoping for more."--Amazon Reviewer
Posted by Holly Hook at 8:00 PM