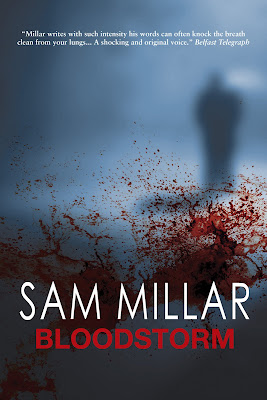 Bloodstorm is the first in a series of PI books featuring Karl Kane. Karl Kane is a private investigator with a dark past. As a child, he witnessed the brutal rape and murder of his mother. The same man sexually molested Karl, leaving him for dead with horrific knife wounds covering his body. Years later, Karl has a chance to avenge his mother's murder by killing the man responsible. The opportunity arises on one unforgettable Good Friday night. For reasons he later regards as cowardice, Karl allows the opportunity to slip through his hands, only to be shattered when, two days later, two young girls are sexually molested and then brutally murdered by the killer on Easter Sunday morning. Karl now holds himself responsible for their deaths.

"Bloodstorm is the first in a powerful new crime series from Millar, and its consistently tough prose should help gain Millar fans in the U.S. with a taste for the hard-boiled. Extremely original, it is a chillingly griping book.”--Publishers Weekly

"Crime noir doesn’t get much darker or grittier than this shocking tale of corruption and revenge... Altogether, Bloodstorm is a real find for aficionados of the classic hard-boiled novel who would like to see the form updated without it smelling like an anachronism.”--Booklist, USA