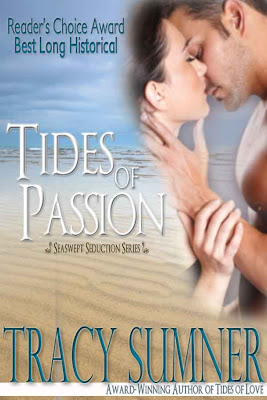 Tides of Passion by Tracy Summer

AN UNCONVENTIONAL WOMAN
Spirited Savannah Connor is passionately committed to stamping out social injustice. Yet when she arrives in Pilot Isle, North Carolina, ready to take up a new cause, she quickly finds herself on the outs with the town constable. Zachariah Garrett is the most arrogant, infuriating, maddeningly attractive man it’s ever been her misfortune to meet. And suddenly, Savannah is fighting a whole new battle—this one against her own yearning for a man who is impossible to resist.

AN UNCOMPROMISING MAN
Ever since his wife’s death two years ago, Zachariah Garrett has dedicated his life to keeping the peace. And avoiding the thought of love. But Savannah Connor isn’t an ordinary woman—and she proves hard to ignore. She’s a beguiling beauty with the power to awaken emotions Zach thought he’d never feel again, and the tenderness to help him forget his fears. And risk his heart once more.

"Tides of Passion is a true romance. I rarely like the hero and the heroine as much as I liked Zach and Savannah. Loved them!!! They don't just fall in love - they battle and argue and flirt - with such witty dialogue and sizzling tension. I just couldn't put this book down. What I mean by real romance is the flirtation. It's there page after page, from the first chapter of the book. And when Zach and Savannah finally have sex, you're SO ready for these characters to be together. I actually think they were perfect for each other.

It was a terrific read. The setting was unusual, too! I'm getting kind-of sick of London. I've traveled to the Outer Banks area, and I can see it being very romantic.

I've also rarely read a romance where the characters talk to each other in such a natural way. I finished the book in one night. I can't wait for the release of Noah's story, Tides of Love! Another Garrett brother finds love."--Amazon Reviewer
Posted by Holly Hook at 8:00 PM