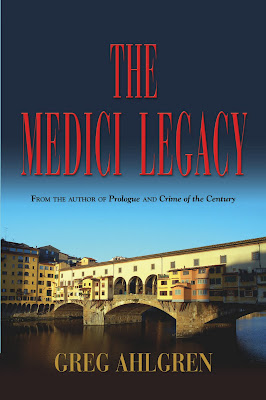 THE MEDICI LEGACY by Greg Ahlgren

When thirty-something Deputy Inspector Antonio Ferrara of the Italian Polizia di Stato discovers that the seemingly random victims of a Tuscan serial killer are all actually illegitimate descendants of one Giovanni di Cosimo de Medici, a 15th century Florentine banker, his superior scoffs at his theory, the Italian military police caution him to leave this closed case alone on the basis of “national security,” and even his father uses the occasion to hector him to leave police work and return to the family art business. Undeterred, Antonio enlists the aid of Rachel Fuller, an American Fulbright scholar working on her Medici dissertation in Florence, and together they travel to America to unlock a secret that spans three continents.

"After the murder of a wealthy socialite rocks his hometown of Florence, Deputy Inspector Antonio Ferrara searches for redemption in a case he failed to solve. Unknowingly handsome, with a keen eye and an acute sense of observation, Antonio, the son of a famous art dealer, is burdened by his guilt. Under the nose of his doubting supervisors, he reopens the case and stumbles into a cross-continental crime ring involving secrets from the past and a powerful Renaissance-era family - the Medici.

The name 'Medici' links the murder with a string of random kidnappings occurring in the United States, but what is the connection? Are the descendents of the five-hundred year old banking family being targeted, or is Antonio chasing a myth?

Antonio pairs up with Rachel Fuller, American doctoral student studying the Medici, and is suddenly whisked across the ocean, chasing after what local police have dismissed as a simple missing persons. Each layer of discovery leads to more questions, as Antonio realizes that his suspected kidnappers are entangled in a web of criminal activity involving germ warfare, a World War II feud and legendary treasure. There are secrets in the Medici line only science can uncover. With the odds stacked against them and danger at every turn, Antonio and Rachel race to untangle the clues in order save the life of an innocent girl.

The Medici Legacy unravels slowly at first then leads you down a spiraling staircase of mystery and excitement. Alhgren's careful use of dialogue makes his storytelling glow. His characters are believable, even likeable, with all their unique quirks. Alhgren's descriptive style and intelligent humor add texture to this international crime thriller. The Medici Legacy is an intriguing read that will keep you guessing until the very end."--Amazon Reviewer
Posted by Holly Hook at 8:00 PM