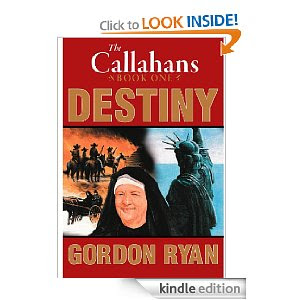 The Callahans Series Books 1 and 2

Where to Get Them:

Vol. I - Destiny: Fleeing an abusive father and a hopeless life in Ireland in 1895, nineteen-year-old Tom Callahan takes passage on a ship bound for America. On board, he meets Katrina Hansen, a young Norwegian woman traveling to Utah. It's not a likely match. The brash Irishman is a Catholic, a brawler and a young man without prospects. Katrina is a refined young woman, yet naive in the ways of the world. Lured into a polygamous marriage, she finds herself abandoned on a remote Mexican beach as the man she loves, unaware of her status, seeks his fortune in Alaska. Destiny is a sprawling historical novel set at the turn of the 19th century, played out in such far-flung places as New York City, the gold fields of Alaska and Old Mexico.

Vol.II - Conflict: Tom Callahan strikes it rich in the Alaska goldfield while Katrina struggles to remain alive in Mexico. Demonstrating her determination and faith, the reader is shown the resilience of this young woman who has grown beyond her years. Continuing through 1912 and the disastrous voyage of HMS Titanic, Conflict will keep you on the edge of your seat.

"This is a thrilling adventure that brings you to the brink of hope and encouragement, only to reveal that victory is not so easity obtained, except through much sacrifice, faith, courage and sheer endurance. The historical accuracy of this novel beckons you into its pages and allows an empathic glimpse of the challenges that were presented and dealt with by the spirited and valiant settlers of the untamed and unclaimed West. It is very captivating!"--Amazon Reviewer (Book One)

"It's not very often that a sequel comes along that matches the excitment of the first book. I loved the first book, "Destiny" and was anxious to read the second to see what would transpire with Tom and Katrina. I was not disappointed. I not only grew to love them more, but developed a love for their children as well. I look forward to the third and know that the author will keep me up into the wee hours of the night once more!"--Amazon Reviewer (Book Two)
Posted by Holly Hook at 8:00 PM