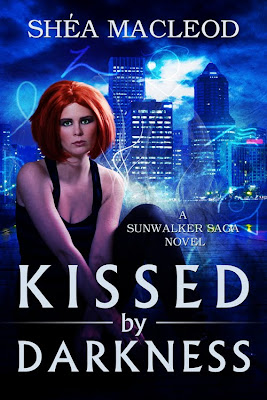 Kissed by Darkness, Sunwalker Saga Book One by Shéa MacLeod

Danger is always on the menu for Morgan Bailey, a sexy and street-smart bounty hunter, who prowls the dark underworld of Portland, Oregon hunting creatures of the night. Morgan’s never met a vampire she couldn’t dust or a demon she couldn’t kill until she’s hired to destroy a new kind of mystical threat: the Sunwalker.
A powerful immortal once believed myth, the Sunwalker carries with him an ancient secret which, if left unchecked, will destroy Morgan’s world. Pursued by a passionate Templar Knight and the target of the local vampire clans, an ancient power is awakened within her, unlike anything she’s ever known. Morgan must uncover the truth behind her mission and about herself, before the Darkness lurking inside swallows her whole.

"I just finished reading this book and WOW, it was fantastic. The author has a real way with words that is so entertaining, and the story line was great. I like a heroine who has a great sense of humor and doesn't take herself too seriously, but is definitely able to get the job done. It was fast paced and kept me guessing until the end. The premise for the story is unique in my experience and leaves the door wide open for future novels in the Sunwalker Saga. I am anxiously awaiting the next installment! Great Read!!"--Amazon Reviewer 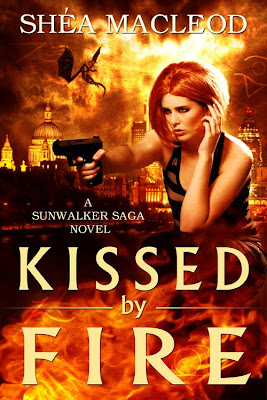 Kissed by Fire, Book Two in the Sunwalker Saga by Shéa MacLeod

Vampire hunter Morgan Bailey’s life is about to take a turn for the weird. As if Sunwalkers,a Templar Knight, and an ancient Atlantean artefact weren’t enough.
When a MI8 analyst is brutally murdered, Morgan is called to London to investigate. She stumbles across a conspiracy involving an extinct supernatural race. Dragons. But the dragons may not be as extinct as everyone thought.

The Darkness grows inside her. A new power rages out of control. She is stalked through the streets of London by the vampire who murdered her.

Morgan must hunt her own killer. She must uncover the truth. Or humanity will be plunged into a war it can never hope to win.

"Ever since reading Kissed by Darkness, I have been VERY MUCH anticipating the release of the second book in the Sunwalker Saga. I was NOT disappointed! Kissed by Fire reads clean, the pacing is fast and the dialog is clever and tight! Not to mention every chapter ends with a hook. And did I mention it's funny, too? 'Cause I wouldn't love The Sunwalker Saga if it wasn't also humorous. Add a badass vamp slayer, witches and other paranormal characters, a stud muffin templar knight, sexy dragon shape-shifters, and this makes for a SMOKIN' read! There are a few twists and turns that will keep the reader guessing, but the ending is satisfactory and surreal!

Shea MacLeod, you had me at dragon! You are now my FAVORITE paranormal author."--Amazon Reviewer
Posted by Holly Hook at 8:00 PM