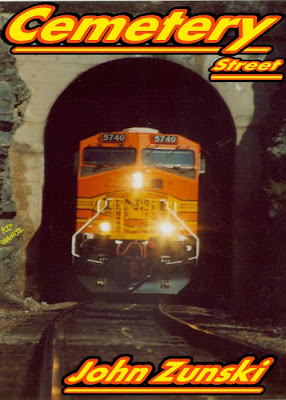 Cemetery Street by John A Zunski

In a world of presumptuous people, irony is alive and well,” concludes James Morrison, the narrator of this touching coming of age novel. A view Shannie Ortolan - James’ longtime friend, sometimes lover, and full-time obsession - wouldn’t argue. From their first encounter as teenagers until Shannie’s death, experience the twists, turns and enthralling characters that populate Cemetery Street.
On the cusp of the new millennium, James fulfills a promise. Reenacting a childhood ritual, he places a mud pie upon a grave. This simple act triggers powerful memories.

Meet the people that shaped James’s life. Shannie, who among other things, introduces him to the sport of dodging freight trains. Count, the cemetery caretaker’s son, helps James navigate the minefields of adolescence until destiny is met in Desert Storm. Russell, an aging blind African-American, guards a horrifying secret behind a cloud of cigar smoke. Diane, Shannie’s mother, a college professor dispels the notion of tweed jackets and elbow patches. Steve Lucas, a mortician’s son, who despite bizarre obsessions, stands by James during his most challenging times.

"I had never heard of John Zunski when I started reading this book. Now I am a fan forever. This is one of the best books of this genre I have ever read. Zunski gives us complete characters and a great plot along with plot twists that keep you guessing and the end--what a way to end a book. I will read more of his work because of this book."--Charlene Perroni

"This is refreshingly unique book that looks at death and how it affects friends who grow up with each other. A very thought provoking piece of work."--Amazon Reviewer
Posted by Holly Hook at 8:00 PM