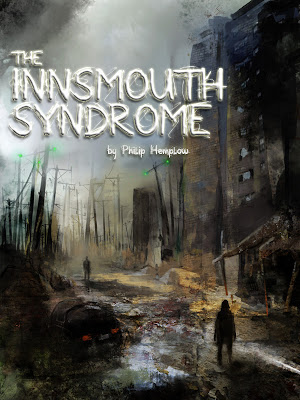 The Innsmouth Syndrome by Philip Hemplow

Veteran epidemiologist Carla Edwards has been dispatched by the C.D.C. to investigate a cluster of inexplicable mutations among the young people of Innsmouth, a sickly and destitute town on the Massachusetts coast. Initially skeptical, she rapidly discovers that the true mystery is older and more horrifying than anything for which her training has prepared her. As the danger mounts, a double helix of history and urban folklore draws her inexorably to the door of a sinister, evangelical cult - and beyond the limits of her science and belief.

""This is a longish-short story based upon HP Lovecraft's Shadow over Innsmouth.When four Innsmouth teens die in a car-crash,their strange physical characteristics baffle local medics.The CDC is called in ,and we follow the progress of the CDC agent ,Carla as she tries to discover the truth about the grim,desolated town that is Innsmouth and its oh-so dark secret.

I was pleasantly surprised by this. Perhaps I have been guilty of snobbery about fiction based on Lovecraft's work,but this does not put a foot wrong.Innsmouth is vivid and real as is the general atmosphere of menace, bleakness and fear.The plot updates the story in a convincing and very respectful way.Like the 1931 source-story,this builds to a terrifying and unexpected conclusion."--Amazon Reviewer
Posted by Holly Hook at 8:00 PM