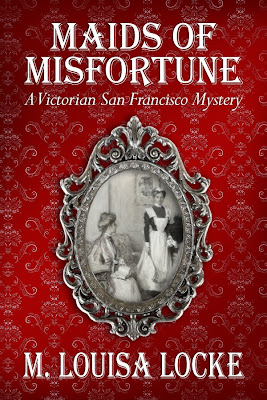 It’s the summer of 1879, and Annie Fuller, a young San Francisco widow, is in trouble. Annie’s husband squandered her fortune before committing suicide five years earlier, and one of his creditors is now threatening to take the boardinghouse she owns to pay off a debt.

Annie Fuller also has a secret. She supplements her income by giving domestic and business advice as Madam Sibyl, one of San Francisco’s most exclusive clairvoyants, and one of Madam Sibyl’s clients, Matthew Voss, has died. The police believe his death was suicide brought upon by bankruptcy, but Annie believes Voss has been murdered and that his assets have been stolen.

Nate Dawson has a problem. As the Voss family lawyer, he would love to believe that Matthew Voss didn't leave his grieving family destitute. But that would mean working with Annie Fuller, a woman who alternatively attracts and infuriates him as she shatters every notion he ever had of proper ladylike behavior.

Sparks fly as Anne and Nate pursue the truth about the murder of Matthew Voss in this light-hearted historical mystery set in the foggy gas-lit world of Victorian San Francisco.

"M. Louisa Locke, a semi-retired History professor has written a delightful mystery set in Victorian San Francisco. In rating a book it is of first importance that I care what happens to the main characters and she has do a good job of drawing them in multiple dimensions and in a way that leads you to care about them. Secondly I look to see if I can figure out the plot before I get to the end. While she is very good at foreshadowing who the the "bad guy" is by the end of the book I was still unable to figure out several of the plot twists until she skillfully revealed them. Third I rate a book by how much I look forward to my next reading installment. This book I carried with me to that when I had a few uncommitted moments I could continue to read it. By the end I was willing to lose sleep to find out how the locked room (actually locked house) mystery was accomplished.

Very highly recommended and I look forward to her next book when it becomes available."--Amazon Reviewer
Posted by Holly Hook at 8:00 PM