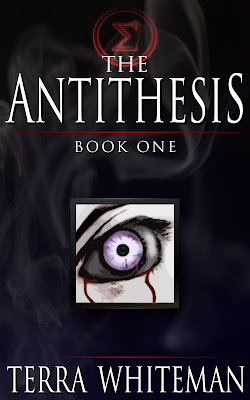 The Antithesis by Terra Whiteman

THE ANTITHESIS #1: Justice Alezair Czynri is the newest recruit of the Jury, a group of powerful beings who reside in Purgatory and enforce the Code between Heaven and Hell. However, Justice Czynri could not have come at a worse time. A storm lays just over the horizon... One that brings with it a war.

"Terra Whiteman's vision of Heaven and Hell is so refreshingly different from anything I have ever come across before, that I was sold." - The Eloquent Page, UK

"What I like about [The Antithesis] is its moral ambiguity. Heaven and Hell, angels and demons can't be categorised as good and evil. If anything you're much more likely to sympathise with the demons, in the same way that you would sympathise with Satan as he's portrayed in Paradise Lost." - Violin in a Void, South Africa
Posted by Holly Hook at 8:00 PM