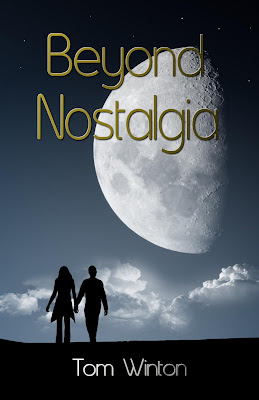 Beyond Nostalgia by Tom Winton

Born with blue in his collar instead of his veins, best-selling author Dean Cassidy chronicles his soul-scarring rise from New York's darkest alleys to a place high atop the literary world.

Unlikely and difficult as such a climb is, there's yet another force working against Dean. It’s the powerful, undeniable human emotion we call nostalgia. He’s forever haunted by treasured memories of Theresa Wayman, his long-estranged teenage soul-mate. Theresa! Theresa! Theresa! She just won't go away!

Dean's loving recollections of Theresa continually taint his twenty-year marriage to Maddy Frances--a woman so forgiving she should be canonized a living saint. Theresa, not his wife, is the one Dean feels standing at his side every time he loses a job. She’s alongside him when he actually goes postal on one. She shares all his fury and desperation as he forever tries to fight back the inevitable corporate takeover of his family. She's center-stage in Dean's mind and far too deep in his heart the day Maddy Frances finds him unconscious at a botched suicide attempt--a time-faded photograph of Theresa clenched in his hands.

In spite of it all, Maddy’s love never wavers. Thanks to her undying allegiance, Dean’s ship eventually comes to port. He gets a novel published, and defying all odds, the book commandeers every Bestseller List in the country. But, just when it seems their money problems are over, the test of all tests comes along. On the last night of a twelve-city book tour, Dean looks up at the next person in a long line of autograph seekers, and there, standing before him, is Theresa Wayman.

Later that night, alone with Theresa in his Atlanta motel room, Dean Cassidy finally finds that elusive, peaceful haven that lies beyond nostalgia. But wait. It may not be where you think.

"“Beyond Nostalgia is a monumental romance, a 'Gone with the Wind' set not against the backdrop of the burning of Atlanta, but against the rumbling disaffection of America itself”--Amazon Reviewer
Posted by Holly Hook at 8:00 PM