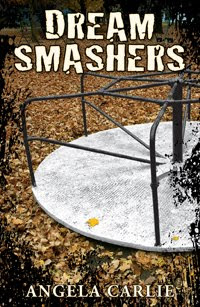 
Sixteen-year-old Autumn has spent her entire life worrying about others. Her ailing grandma, meth-addicted mother, and a best friend who is always in trouble. She's spent the last few years attempting to worry less, to be carefree, without success.

Enter Evan, whose radiant attitude is an Autumn magnet. With Evan at her side, Autumn's able to let some of her worries go as they trudge through life's difficulties and fall for each other in the process.

A girl who no longer wants to care and a boy who cares enough for the both of them, Dream Smashers is a love story, but most of all, it's about letting go.

"It is a must read for anyone who enjoys books dealing with heavy social issues and those who are fans of coming of age stories with hope and a light at the end of the tunnel. I encourage everyone to read this book though. Bravo, Ms. Carlie." -- Into The Morning Reads

"Carlie's writing, although raw and gritty at times, is beautiful." -- The Caffeinated Diva Reads
Posted by Holly Hook at 8:00 PM