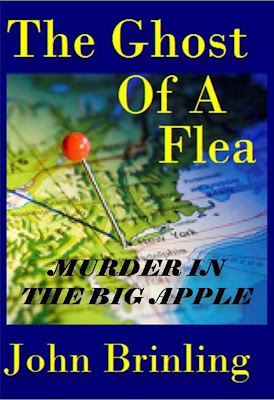 The Ghost of a Flea by John Brinling

The murder of Roger’s musician friend, Gideon Whiting, turns Roger’s world up-side-down. His wife, Natalie, lies to him. His best friend, Ted, lies to him. His boss and U.S. Senate candidate, Charlie Holt, lies to him. And Lieutenant Tarrington, a homicide detective, is convinced Roger killed Gideon—but is Tarrington who he claims to be, or is he lying, too?

Peggy Curtis, the blond bombshell who dropped into Roger’s life one snowy night after he left Gideon’s apartment, might be the only person who can unravel the Gordian knot facing Roger, yet she has serious credibility problems, and is the last person he would want to rely on with his life and freedom on the line.

The drug cartel masterminding much of the chaos seeks an address book it thinks Roger took from Gideon. As their ruthless pursuit intensifies, the police learn of the book and join the chase. The problem is, Roger doesn’t have what they want and he must get it before they decide he is expendable.

"If you like a good thriller you will love this book. It grabbed my interest from the beginning as the main character, Roger, struggles with his sanity following the murder of his friend, Gideon. Everything he believes is questioned when his wife and friend contradict his memory of events. No one is who they seem. An apparent chance meeting with a beautiful but mysterious woman begins a romantic liasson and partnership as the two try to solve murders and mysteries in this story. The twists and turns make it hard to put down. A great plot and very well written."--Amazon Reviewer

"I randomly came across this book and loved it! It was one of the best mystery novels I've ever read, can't wait to read more work by this author!!"--Amazon Reviewer
Posted by Holly Hook at 8:00 PM