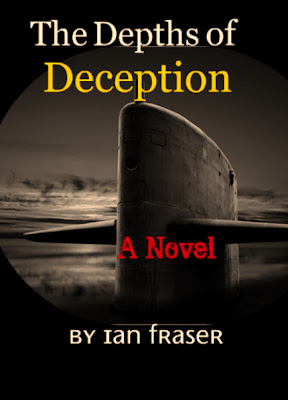 The Depths of Deception by Ian Fraser

There are only a few good solutions in a world gone mad. America has disappeared some years ago. A neo-fascist Party has come to power in the UK. Russia has expanded south. Ships leaving continental European waters are attacked. China is on the rise.

A submarine hurtles through the cold dark waters of the Atlantic en route to an unknown destination. Only the ship’s doctor knows its true mission, but he is not who he appears to be.

A sweeping tale moving from the violent heart of Apartheid South Africa, to the ruins of the United Kingdom, and down to the edge of the world in the frozen Antarctic landscape, The Depths of Deception is a tale of revenge, served as a shatteringly cold dish.

"I thoroughly enjoyed this book. The story follows a super assassin both before and after his family is killed. It is not written in sequence which adds an element that really works with the story. This is often hard to pull off, but Mr. Fraser makes it work. The writing is particularly good. It felt like the author really crafted each sentence. I especially enjoyed the descriptions of Africa. I found this book both thrilling and engaging. I highly recommend this book."

"This is the perfect book to read if you like The Bourne Identity and other books/movies in a similar venue. ... The author does an exceptional job creating real people within the pages. These characters are developed in an unfolding way that make them seem real (not perfect beings with unusual human powers.) The dialogue is well written and understanding the motivations of each character does come through well in their shared thoughts. This book leaves you wanting more.
Overall Impression: There were numerous times I caught myself thinking further about elements of the book. I counted three times in the first chapter thinking "I never thought about it like that." Ian Fraser writes a top notch book. It is recommended to put this one in your top ten to read."
Posted by Holly Hook at 8:00 PM