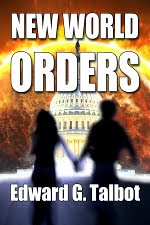 In the nineteen-sixties, a group of wealthy men concludes that it's already too late to stop global warming from destroying the planet. But they have a plan to save themselves.

Twenty years later, Jack Crowley and Jim Patterson stumble onto the conspiracy, and every answer they find is accompanied by more questions - and more deaths.

Jack is a former idealist, turned cynical by his years working as a New York tabloid editor. But his enthusiasm returns as he looks into the work of a NASA scientist who tells Jack about cover-ups at the space agency. Jim is a detective with little patience for conspiracy nuts. But he hates loose ends, and is unable to let go of the inconsistencies in another suspicious NASA death. Soon, his investigation leads him to Jack, and they join forces.

As Jack and Jim dig deeper, they are targeted by the type of killers that don't usually miss. From Washington to Las Vegas to the Middle East, they manage to stay one step ahead of their pursuers in a race to expose the truth, and maybe, just maybe, save the world.

"New World Orders will make you question everything you have ever been told by the system..it will suck you in from the very beginning and linger long in your thoughts after you finish the last page."--JAMES MELZER,author of Hull's Landing

"A bureaucratic apocalyptic cover-up! Ed's mixture of real world politics and the possibility of what may come, keeps you captivated and wondering... what if?"--EMERIAN RICH, author of Night's Knights

I lost a heck of a lot of sleep on this book. . .New World Orders is a must read. I highly recommend it to all readers.--A TURN OF PAGE
Posted by Holly Hook at 8:00 PM