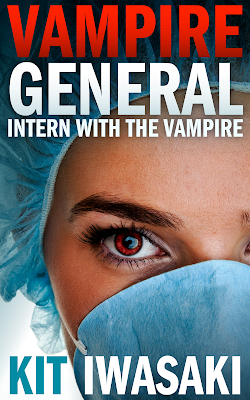 Vampire General: Intern with the Vampire by Kit Iwasaki

Human medicine is easy. On her first day at Grace General Hospital, new intern Aline Harman risks vampire infection, demonic possession, and having her heart torn out of her chest… and this from her colleagues.

Juggling transhuman politics only becomes more difficult when a patient’s life is at stake. With a zombie to resucitate and a mermaid in critical care, Aline has her hands full. At least the doctors are good-looking.

"The best way to describe Intern with a Vampire, is a hospital drama where the patients and doctors are supernatural beings rather than humans. The beginning of this book had me cracking up, and I definitely smiled. It reminded me of pretty much every hospital drama or soap opera that I've ever watched. Within the first page two characters are in a supply closet...and they aren't looking for supplies.Of course, since they're doctors they got interrupted by a page. It was definitely entertaining though, and so was the rest of the book. :)"--Smashwords Reviewer

"Vampire General was like watching E.R. but with a bunch of vampires, some black widows and zombies. The story was short but packed with excitement. The main character Aline was fantastic. Being the only human doctor in Grace General hospital Aline had to pretend to be a vampire to be able to care for her patients (a zombie and a mermaid!!). I'm not a big fan of cliffhangers but the way the author wrote the ending was perfect. Lets hope Kit writes a sequel because I can't wait to read more about Aline and the other doctors of Vampire Genral.

*UPDATE*
In the middle of posting this review I found out that there is going to be a sequel!! Isn't that exciting news? The sequel is call: Vampire General: Slash and Burn"--Smashwords Reviewer
Posted by Holly Hook at 8:00 PM