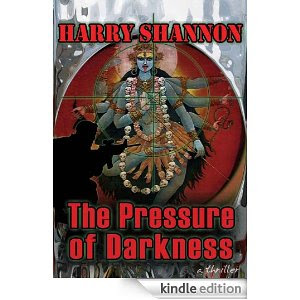 The Pressure of Darkness by Harry Shannon

In October, of 1993 a small Special Ops team roped down in Somalia to assassinate a cult leader. The mission went horribly wrong. Their leader was killed, the medic shot in the spine. Only two of the D-Boys, Red Burke and Scotty Bowden, came away unscathed.

The aging soldiers now live in the LA area. Wheelchair bound 'Doc' is employed by the Coroner's office, Bowden is steadily a deteriorating cop on the take and Burke works both sides of the law to cover his wife’s medical bills. When famous horror novelist Peter Stryker is found dead, Burke is hired to investigate why a man would commit suicide by butchering his own body.

The trail rapidly leads Burke to embrace an old lover, confront a vicious drug lord, and finally recruit his friends to stage one last mission against a mysterious cult with plans to unleash a deadly virus.'

"A dark, thrilling tale of murder and intrigue that will have you turning the pages as fast as you can."--Crimespree Magazine

"The Pressure of Darkness is a dark and thrilling stroll along the knife edge. Highly recommended."--Cemetery Dance

"Shannon’s impeccable pacing and eye for the terrifying will leave the reader shaken and unsettled."--Publisher’s Weekly
Posted by Holly Hook at 8:00 PM