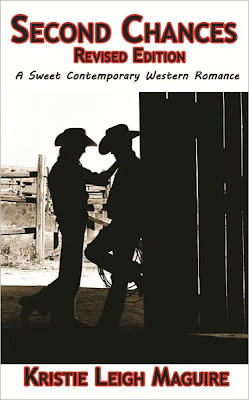 Jane Porter's dreams of marrying Mike Farley, the handsome cowboy who lives on the neighboring ranch, are shattered when Mike suddenly marries a redheaded stranger he met at the Wild Horse Saloon in Casper, Wyoming. After Mike stomped all over Jane's heart with his cowboy boots, can Jane ever trust her heart to a man again?

Mike Farley marries beautiful Samantha Jo Smith after a whirlwind courtship with no thought to Jane Porter, his childhood sweetheart and the woman everyone in Fremont County thought he would marry one day. Mike soon learns to regret his hasty marriage to Samantha. Can Mike win back Jane's heart even though he had shattered it into a million pieces?

Longtime friends and neighbors Jim Porter and Liz Farley turn to each other for support after the unexpected death of their spouses. Will Jim and Liz's friendship turn into something deeper even though they both feel they have had, and lost, their chance at love?

"Kristie has a way of opening your mind; you become part of her creation. She writes in such a way that you want to follow her every word – that is the sign of a true storyteller." Patti Fleishman (Romance Junkies)

"She's smart, she's sassy, she has a pen that drips sizzling ink. If you like steamy stories or the Happily Ever After kind, then this is a name that belongs on your bookshelf." - Emjae Edwards (Ink n Beans) 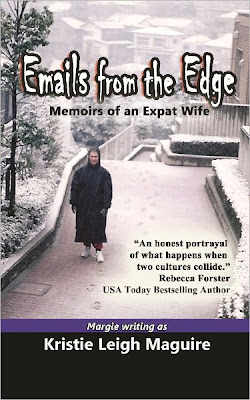 Emails from the Edge: Memoirs of an Expat Wife by Kristie Leigh Maguire

Kristie Leigh Maguire defies today’s world of political correctness in her memoirs as an expatriate wife during the turbulent decade of the 90s. Through emails with her friend in the States, KLM gives us a raw and brutally honest look at her experiences. In a way it is like being a voyeur, pulling back the curtain of friendship, and finding out they are not just talking about milk and cookies.

"This is a fun glimpse into a private conversation between two women, talking about Japan, Saudi Arabia, and the United States and touching on friendship and what it means to live abroad. It's quick, interesting read with an intimate feel, like finding an open email box when you're in a cybercafe somewhere abroad and snooping in on someone's interesting conversations. You know you shouldn't, but you keep reading, curious to find out where the conversation turns next."

"Have you even wanted to eavesdrop on a conversation between friends just to see what they are thinking? Well, Kristie Leigh Maguire gives you that opportunity. If you ever thought it would be fun to "hack" into someone's email to see what makes them tick, this is your chance. You will laugh, cry and laugh again at the trials and tribulations that an American in Japan would go through. I recommend that you join the author and her friend in their lives.....well, just eavesdrop on them."

"A new insight on an age old problem of loneliness and friendhips. A voice from the real world. The bonds that we build can be of the moment or a lifetime. However, it proves that we all need someone and especially a friendship that binds as these two did. A terrific and fast paced book of a real life story. A unique Story of frienshsip and courage. I recommend this heartfelt and well written story by Kristie Leigh Maquire."
Posted by Holly Hook at 8:00 PM