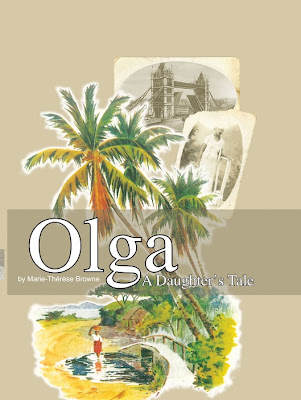 Based on a true story, 'Olga - A Daughter's Tale' is a family saga about heritage, culture, identity and belonging with an epic feel - from Jamaica to England amidst World War II at a time when Jamaica was a jewel in the crown of the British Empire.

Written in the form of diary entries and letters, it is about the cruelty, revenge and jealousy inflicted on an innocent young woman and about her moral courage, dignity, resilience and, in particular, love.

It is the story of a remarkable woman who, because of circumstances, made a choice which resulted in her losing contact with her beloved family in Jamaica until nearly half a century later when her daughter discovered her mother's past.

"Fascinating true story, a very touching and moving book about an inspirational personal life, and which has an epic feel about it, from Jamaica to England amidst World War II ! Can't help but thinking that it's screaming "Make a movie of it, make a movie of it!!"--Amazon reviewer

"Olga- A Daughters Tale is the story of one family and their trials and tribulations that they have gone through. Marie-Therese (Browne)Campbell would never had known about her family in Jamaica. A true story that deals with prejudice, deceit, cruelty all heaped on women during the war. When her mother was sick in the hospital if she had died Marie never would have known about the family behind in Jamaica. It's a fast read that is strictly taken from diaries not only from her mother Olga but her great aunt Lucy and her grandmother.

As she relates how the family ended up in Jamaica from England and how her grandmother at that time married a black man which was highly frowned upon. Olga goes to England to attend a dance school and live with her Aunt Martha, whom she soon learns is a liar and an alcoholic. With the advent of the war she is unable to return to Jamaica. When she is raped by an army doctor she did not realize she could get pregnant and that now ends her training to be a nurse and she is forced to leave that position.

As we follow the life of Olga who was not about to give up her child, even though she falls on hard times, she manages to send her to a good Catholic Boarding school for a time. In all this time she never writes home as she feels this would bring shame to her family. In the end her daughter Marie places an ad in the Jamaica Paper and after 50 years Olga finally talks once again to her family and Marie now has a connection.

This is a powerful story of a close knit family that takes the reader through the marriages, births of children and the war and how the family drifts apart as some moved to the United States . Through their family history, their heritage and their culture and how the war and events of that time separated one young lady from her entire family. Did Marie ever get to meet her father, No he also moved to the United States and died in an accident, more than likely never knowing he had a daughter in England.

If you like Biographical genre's then I feel you will enjoy this book. Would make a great movie."--Amazon Reviewer
Posted by Holly Hook at 8:00 PM