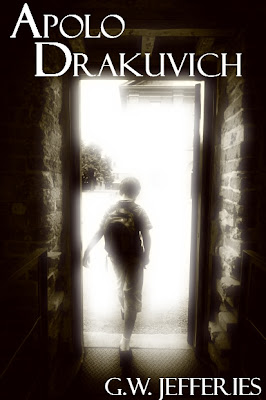 G.W. Jefferies' Apolo Drakuvich captures the life of a petty criminal whose story is summed up by a quote from his long-time crush: "He may look smart, but he really isn't." The book is a pleasurable read ranging from bizarre and senseless to utterly tragic. Revolving around parasitic journalism, media and government corruption, and a ruthless, conniving judge who milks the citizens out of millions of dollars, Apolo Drakuvich can be described as a compilation of wild and sheer madness--captivating the readers' attention from beginning to end. With its raw descriptions, penetrating dialogue and crisp writing, this book is like no other.

Within all the madness that so epitomizes the life of Apolo, G.W. Jeffries presents a live of regret in epic proportions. Sitting in a jail cell, Apolo reflects, "One thing is for sure, I let it all slip away...so many opportunities lost." Apolo sadly examines the events and decisions of his life, and the paths he took and should have taken. Apolo seeks peace of mind and justice, but flashbacks of his past continuously haunt him; moreover, he seems to be victimized by a corrupt justice system everywhere he goes.

Initially, the book has Apolo eight years removed from his troubled past. The story then flashes back from different stages of Apolo's life, giving the audience the background it needs to understand his character as a whole.

From being called "dork" and bullied by "Cocaine Shane" during his school days, Apolo goes through a number of life changing events. One of the most defining moments of the book, peering deeply into his character, is the scene in which Apolo states, "I wasn't always like this. I'm a hardened, thicker skin, arrogant fool. Like all of us, past events have shaped me into the person I'm today. But I've gone through so much crap. This environment has changed me. The people. The stupidity." As an offender, Apolo discusses pertinent issues of today's society, where it is next to impossible for offenders to live normal lives, despite the desire to do so. Essentially, law enforcement and authorities seem to systematically destroy the offender by placing constraints on the offender such as restrictions on where to live, GPS monitoring, registering as offenders on websites, and more.

Apolo Drakuvich is a must-read, highly recommended thriller that is a microcosm of numerous real-life issues encompassing the wild, the bizarre, and the tragic.

"Apolo. Poor Apolo. The pale skinny guy with the god-like name. You can't help but feel sorry for him. And yet, his problems are of his own design (or dismantling). The author does a great job at portraying a character in a way that makes the reader like Apolo, if not relate to him. The book catapults readers into Apolo's world from the very first sentence and then takes us on a whirlwind journey while we discover the character's reactions to relationships, situations, and life in general. I was captivated by G. W. Jefferies' depiction of the character's personality through Apolo's perspective."--Amazon Reviewer

"My wife recently got this book for her Kindle; and it is fantastic! I quickly got pulled in to the world of Apolo Drakuvich and was mesmerized. It's the kind of book you still keep thinking about even hours after you put it down. Apolo's journey is raw, dark and moving, told in a refreshingly direct way that both entertains and enthralls. I highly recommend this book!"--Amazon Reviewer
Posted by Holly Hook at 8:00 PM