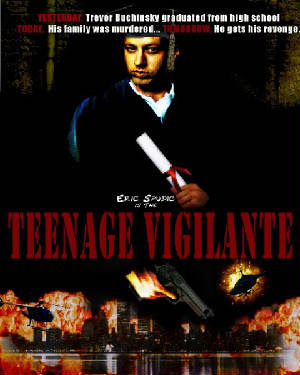 TEENAGE VIGILANTE is the new ebook from writer Eric Spudic, screenwriter of the cult horror b-movies AQUANOIDS and CREEPIES. The story deals with 18 year old Trevor Buchinsky, who's recently graduated and come home to find his family murdered. He teams up with his uncle to get revenge.

It turns out that a gang of Vietnam vets are tracking down an arsenal of weapons and are hellbent on destroying anyone in their path. In order to stop this ring of terror, Trevor is gonna need a lot of weapons, a lot of bullets, and a whole lotta body bags.

If you dug films like DEATH WISH, THE EXTERMINATOR, SAVAGE STREETS, THE PUNISHER, or KILL BILL, you'll dig this. Lots of action, guns, explosions, martial arts, and revenge. He traded in his diploma for a 12-gauge!

Part screenplay, part comic book - it's a new breed of storytelling from this rookie author. The book plays out as a tribute to 80's action and exploitation films, made by the likes of AIP Home Video, Cannon Pictures, and Cirio Santiago.

"If you're the type of guy who likes vigilante action movies that pit a remorseful and vengeful individual against the decadent, underworld punks that murdered his family in cold blood, TEENAGE VIGILANTE is for you. This is a very light book, which is not surprising since it was adapted from a script. The writing is tight and one can easily imagine the events unfolding on the big screen word-for-word. This thing kept me wholly entertained for the hour it took me to read this while on the elliptical, and with my wandering attention span, that can be tough."--Amazon Reviewer
Posted by Holly Hook at 8:00 PM