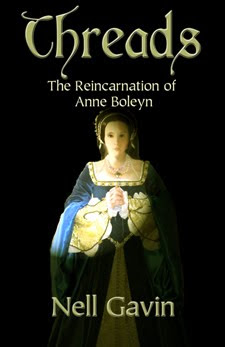 Threads: The Reincarnation of Anne Boleyn by Nell Gavin

In 1536, Henry and Anne are at the mercy of influences outside their control, explosively incompatible, and caught in a marriage that ends in betrayal so shocking that Anne requires lifetimes to recover.

Henry, seemingly in defense of Anne (but more likely acting out of "stubborn perverseness", she observes), terrorizes England and decrees widespread political murder in order to protect her. Ultimately, to Anne's horror, this once passionate husband turns on her and has her executed as well.

Threads, a reincarnation fantasy, opens with Anne's execution. Her fury at her husband’s betrayal has enough momentum to survive centuries, but in Threads she learns that she has been assigned a hard task: she must review their history together through a number of past lives, and find it within herself to forgive him. This may prove difficult and take some time. The husband in question is Henry Tudor, the notorious Henry VIII. The narrator is the stubborn, volatile Anne Boleyn, who is not at all inclined to forgive.

It is a very unusual love story.

"Never, ever have I even considered writing a review, but this book deserves far, far more praise than it has received. The language is elegant and jewel-like and the story is transcendant. The use of the Hindu concept of reincarnation and the historically notorious relationship of Anne Boleyn and Henry VIII are wonderful devices to explore love, trust, betrayal and forgiveness, in all types of relationships, throughout time. "Each society-each group within each society-chooses something with which to assign inferiority. ... Among the powerful, it is the powerless; among the rich, it is the poor; among the men, it is the women. ... Neither side sees the humanity in the other. Both sides are equally wrong in this." There are so many levels to the passionate, intricate and exquisitely expressed stories told here. It is a story of love, forgiveness, choice and redemption with some of the most beautiful contemporary prose I've ever had the pleasure to read. And I'm really glad my copy is hardcover, although I may have to order a softcover to loan to friends. I'm not letting my copy out of the house."--Amazon Reviewer
Posted by Holly Hook at 8:00 PM