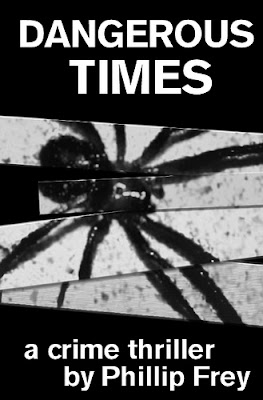 Dangerous Times is a crime thriller. The story is contemporary noir with dark humor and the pull of the unpredictable.

Not for the squeamish, it begins as a creepy slow burner that soon leads to sex, violence, murder, and betrayal.

Frank Moore's impish playfulness makes him an alluring antagonist. He has an outrageous, malevolent plan, and has found the key to its success. Frank has found his look-alike, a close-enough double: John Kirk.

John Kirk leads a troublesome life in San Pedro, common troubles that escalate to the dreadful when Frank Moore comes to town. John Kirk, hunted down and pegged for death without knowing why.

"I was a little skeptical when starting this book, but man was I wrong. It takes a few pages for the author to grab you, but when he does he doesn't let go until the last page. Do not miss this one."

"I thought that this was a very well written thriller that kept my attention throughout. I would recommend this to everyone who enjoys fast-paced thrillers."
Posted by Holly Hook at 8:00 PM