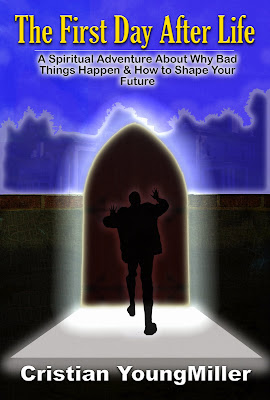 The First Day After Life by Cristian YoungMiller


Tian, a young psychic with overwhelming personal demons and a strong sense of purpose dies suddenly and arrives in the afterlife to an unexpected world outside of heaven. Irabell, his guide, shows Tian that the afterworld is a repository for more than just humans, and explains to him the mystery behind his psychic abilities.

Disturbed by what he learns, Tian escapes his guide and breaks into heaven. There Tian meets a 1500 year old, discontented heavenly resident who shares with him the secret of heaven and god.

Tian's otherworldly journey is cut short when he is forced to make the most important decision of his life. He can choose to stay in the afterlife and reap the rewards he has sown during a difficult life, or he can return to his broken body and complete the journey he was truly meant to take.

"Cristian YoungMiller is a secure writer who is perhaps best known for his brief but entertaining AND educational books 'Happiness May Vary (previously titled 'Happiness thru the art of penis enlargement'), 'Everybody Masturbates', 'Everybody Masturbates for Girls', 'Everybody Has Those Thoughts...so it doesn't mean you're gay'. But in this current major novel Cristian YoungMiller deals with issues that were born in his birthplace in the Bahamas and have followed him through his career as a director and screenwriter: he is on an ongoing journey to explore 'the gap between science and spirituality'.

THE FIRST DAY AFTER LIFE is a fascinating tale/fable that incorporates time travel, exploration of life after death, the netherworld of the soul of the universe, contemporary religions, speaking with the spirits or souls of the departed and even visiting them after some rather bizarre circumstances that bounce between this world and the next to come, between scientific study and spiritual realms of thought. As such it is not always easy to follow the story line: frequent backtracking to read prior chapters again in order to grasp where the author has taken us is necessary to stay on track.

Our main character is Tian, a unique lad with occult psychic abilities who dies at the beginning of the novel (he returns to his pre-death state frequently to re-think his relationships and incidents that occurred in his time on earth) and enters a purgatorial region where he discovers his guide Irabell (who has a very strange life story of his own!) who provides asides into the composition of the universe and the various 'compartments' that range from souls of the deceased and aliens and other strange concepts and informs Tian of the origins of his psychic abilities. Tian eventually escapes to heaven and there goes through a mental metamorphosis that allows him to make some rather shattering decisions.

Along the way YoungMiller takes time to explore the concept of atoms and the structure of matter and motion (very beautifully explained for the novice student of physics), the multi-dimensionality of all living creatures. But these are just topics this book explores in the form of a novel. It is YoungMiller's writing that is intoxicating: 'But after all of the years of his [Tian's] studying the spiritual books and the books on physics, a stone cracked the surface of his peaceful mind. "A loner stays alone, wants for nothing, and affects nothing around him. A discontented person constantly reaches out to others drawing them closer and then pushing them away," he considered. A discontented person is driven to search for more and has an effect on others. That person goes up and down. And more importantly, that person's discontented life is like all of the other discontented lives that are reaching and pushing through the malaise.'

Cristian YoungMiller's style of writing finds almost no comparisons as far as novel writing is concerned. Yes, there are aspects of 'Le Petit Prince', 'Gulliver's Travels', Moody's 'Life After Life', 'The Tibetan Book of the Dead, etc. But what YoungMiller has succeeded in creating is a character who in many ways can be Everyman. His journey may be a bit strenuous to follow at times, but it is consistently entertaining, gripping, compelling and educational. There probably is a screenplay hiding within the covers of this fascinating novel...Grady Harp, April 11"--Amazon Reviewer
Posted by Holly Hook at 8:00 PM