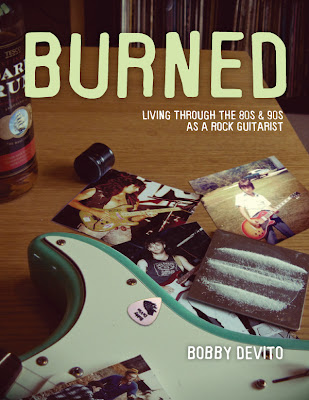 
Note: 10% of the proceeds are going to MUSICARES, the Grammy Award Foundation that helps musicians in distress.

BURNED is the story of a young guitarist as he navigates his way through the music business. Starting in the 80s in a New Wave band, then Rock bands in the 90s, he gets signed to a major label deal and tastes success. But he also tastes a bit more than he bargained for, ending up in multiple rehabs and eventually a mental ward. He then recovers and looks back on a life run wild.

"Although it may be no surprise that the story includes the stereotypical lifestyle excesses ultimately leading to rehab, the level of humor and lust for life Bobby injects throughout makes it impossible put down... Even in the roughest parts.

Unlike similar books by rock superstar legends, this one wasn't written by or for one of those. But DeVito's bio is about being so close to legendary that you can taste it-- sometimes tasting too much.

Having read Clapton's bio, "Up & Down With The Rolling Stones", "Miles" and Aerosmith's "Walk this Way" I can honestly say this book was the fastest paced of all the above. And Bobby's life experiences from a nomadic childhood to touring Italy with Texas Bluesman Sherman Robertson, to studying Aleister Crowley, to living & playing on the Santa Monica Pier, to a mental hospital along with some intense spiritual epiphanies are as interesting and compelling as the best of 'em. And the humor throughout reveals an artist willing to experience a broad spectrum of living despite the costs."--Amazon Reviewer
Posted by Holly Hook at 8:00 PM