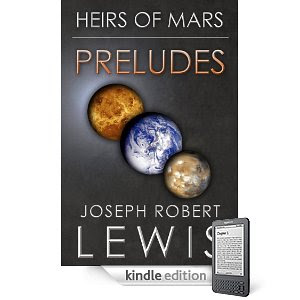 
To Reign in Heaven (19 years before the novel) – India is a synthetic woman in love, passing a blissful year studying Venus and reveling in a shared dreamspace with her silksteel lover. But when her Mother chooses to sacrifice her children, India’s memory of love is her only weapon to save her brothers and sisters.

To Walk the Earth (18 years before the novel) – Victoria is ready to move into the wilderness, far away from the manufactured monotony of modern life. But her boyfriend decides to go to Mars instead, leaving her to enjoy one last motorcycle ride all alone.

To Serve in Hell (1 day before the novel) – Neil is just a man struggling to get through another day on Mars: lousy food, cramped quarters, and a child who doesn’t understand why he can’t have a puppy. But when a cloner arrives, Neil has a chance to take control of something for once in his life, and to avenge the death of his parents.

"`Preludes' is a collection of 3 stories set in the world of Heirs of Mars.
`To Reign in Hell' is set 19 years before the events in the novel and tells us more about the AI intelligence Mother aboard the satellite around Venus.

`To Walk the Earth' is set 18 years before and details Asher's last days on Earth and the lover he left behind.

`To Serve in Hell' is set 1 day before and deals with a Martian colonist's view of the Cloners.

These stories are an excellent addition to the Heir of Mars universe. They expand the story out from the central themes of the novel giving interesting insights into the back stories of the characters."
Posted by Holly Hook at 8:00 PM