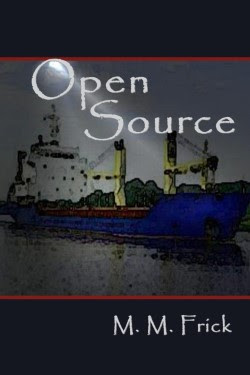 
What if a ship carrying a cargo of stolen Russian missiles bound for Iran was mysteriously hijacked? What if Israel was secretly behind the hijacking? What if the guy who fills the vending machines in the office break room figured the whole thing out?

Based on actual events, OPEN SOURCE is a geopolitical thriller that follows Casey Shenk, a Savannah , Georgia , vending route driver with an insatiable curiosity, as he uncovers a black-market arms deal-gone-bad and the truth behind a high-level plot to shape world politics. Casey draws his evidence from open sources; by reading beyond the headlines. When his theorizing catches the attention of the wrong people and anonymous threats turn deadly, Casey looks to Susan Williams, an intelligent, but insecure, analyst for the New York-based consulting firm Intelligence Watch Group for help. The two soon find themselves in the crosshairs and fighting to save their own lives, while preventing an even greater injustice that could affect the balance of power in the Middle East and plunge the world headlong into the next Great War.

"Open Source is a riveting read that will be hard to put down."--Michael J. Carson, The Midwest Book Review

"Open Source is an intriguing novel of international politics played out in the shadow world of diplomacy...torn from today's headlines....an enjoyable and informative read."--Weymouth Symmes, Military Writers Society of America

"Matthew M. Frick has "hit one over the wall" with his debut novel....I hope he continues the exploits of Casey Shenk.., and brings out more from the creatively complex mind of M. M. Frick."--Gary Sorkin, Pacific Book Review
Posted by Holly Hook at 8:00 PM