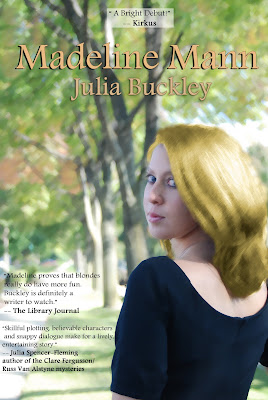 Madeline Mann is a small town reporter whom nobody takes seriously until her old high school friend disappears; when Maddy begins her search for Logan Lanford, everyone takes notice.

This might be because just about everyone is a suspect in Logan's disappearance, from his neglected wife to the shady mayor to Logan's jealous brother. Even Madeline's boyfriend seems to harbor some resentment toward the AWOL Logan and his reputation as a philanderer.

In searching for her old friend, Madeline is also searching for vindication of her career choice and a chance to be independent from a family that threatens to drive her crazy.

"In her bright debut, Maddy is a welcome addition to the cozy scene."
--Kirkus Reviews

"An intriguing debut in an engaging, fresh new series. Make mine Madeline Mann!"
--Julia Spencer-Fleming, author of I SHALL NOT WANT

“This tightly plotted mystery is a fast-paced exhilarating ride, and investigative reporter Madeline Mann is by far the best fe-male lead to come along since Stephanie Plum. A cool, clever, funny read, and the beginning of an absolutely delightful series. Julia Buckley rocks.”
—Anne Frasier, bestselling author of HUSH and PALE IMMORTAL 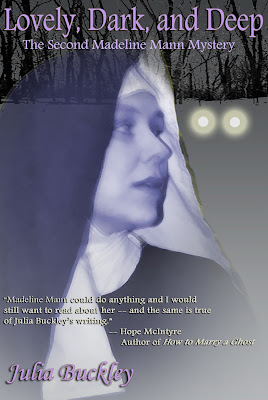 Only months after solving her first mystery, Madeline is called to do God's work--or so says her former English teacher, Sister Moira--by investigating the mysterious death of a young nun named Sister Joanna.

Joanna's death is ten years in the past, but Moira has been troubled by dreams of her young friend, and she is convinced that Joanna was murdered.

Having heard of Madeline's investigative skills, Moira asks her to look into Joanna's death and find out if a murderer still lurks in the town of Webley, and if the dark secrets behind the death of a nun have somehow placed other people in danger.
Posted by Holly Hook at 8:00 PM