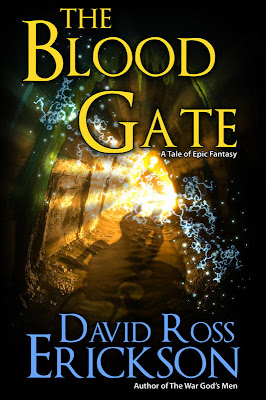 The Blood Gate is the story of two men who would be kings. Hurrus is an exiled prince who believes he is descended from the gods themselves and will stop at nothing to reclaim the throne of his father. Xanthippus is the assassin sent to stop him. Neither man is aware that their destinies bind them as they must unite to face an evil that threatens to destroy them both.

Hurrus is a man of great natural ability and charisma. Fashioning an army in his own image, he leads it to unequaled heights of military glory. But the cost is high. Too high. Aware of his weakness, Hurrus knows he has but one hope to achieve his goal - to enter the mysterious Blood Gate, a crapshoot from which he will emerge with the strength of a god, or the mind of a madman.

Xanthippus is a baseborn murderer, now a warrior of the once-great Prathian Guard, a man who lives by the sharpness of his wits and the swiftness of his blade. Sent to assassinate some prince he has never heard of, he instead finds himself pitted against an evil he cannot begin to comprehend. When he realizes that his assignment to assassinate Hurrus is in fact a suicide mission, he vows revenge.

The two men eventually find themselves fighting for a common cause against a common foe. But even as they forge an alliance, Xanthippus remembers the words of the man who once saved his life: “Someday Hurrus will return, and you will wish you had killed him.”


"I'm privileged to be the friend of the author, so I was allowed to read this wonderful book before publication. I loved it the first time through - I couldn't quit reading, needing desparately to find out what would happen to Xanthippus, Hurrus, Coronea, Gonatas and the rest of the rebel band. I laughed and cried, fell totally in love with Xanthippus and marveled at the way the different threads of each story line were woven to come together in the end with all loose ends tied. The witch is unbelievabley creapy, especially knowing her relationship to the other characters. The love story lines thrill me.

Since that first read, I've read it 3 more times. Each time it gets better and each time I love it more and see things I didn't see before. I would highly recommend this book."--Amazon Reviewer


"A rather charming story. There are a lot of characters, but I don't a reader will loos track of who is who. The subplots each had a strong character. There are a few story lines that intersect so you will never get bored and the writing is well done.

I like the fact of all the research of the ancient world. It was easy to tell apart from the Egyptians to the Greeks and more. When you read the battles you feel like you are right there as the background of research is spot on."--Amazon Reviewer
Posted by Holly Hook at 8:00 PM