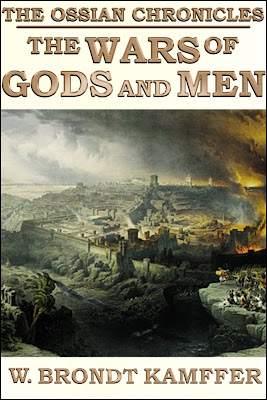 The Wars of Gods and Men by W. Brondt Kamffer


Eboric and his wife Idonea, a pagan witch, successfully assassinate the King of East Osland, usurping his throne in the process. Together, they reignite a centuries-old civil war with West Osland, ruled by the peace-loving Ayern, who was responsible for ending the war in the recent past.

Meanwhile, the ambitious Kjar Kolrig has united the fractured tribes of Vistgard, and now seeks to invade Osland in a bid to expand his fledgling empire. He is supported by a school of sorcerers, though they soon begin to undermine his war effort.

All of them become ensnared in an ancient conflict between the pagan gods and the Ossian God Eom, which threatens to ruin both Eboric and Kolrig, as well as their kingdoms, if neither man can surrender his pride.

"Right from the start of this thrilling fantasy novel, I was drawn into the action, making it hard for me to put the book down. Page after page, the conflict between men, gods and men, and the gods themselves did not disappoint, and completely unexpected events gave rise to feelings I had never felt while reading a fantasy novel. The brilliance with which Idonea's character is developed left me wanting more and more of her. Overall, I laughed, I cried, I was hopeful, and desperately upset. I'd recommend this book to anyone."--Amazon Reviewer

"The author creates a world where war is fought on two fronts. War is ignited between the savage Vists and the Ossians, but this war was the making of gods, who fight their own war amongst themselves for control of the souls of the inhabitants of this world. The story is very well written, the characters truly come to life, and I couldn't put the book down (so to speak). I strongly recommend this series to any fan of fantasy novels."--Amazon Reviewer
Posted by Holly Hook at 8:00 PM