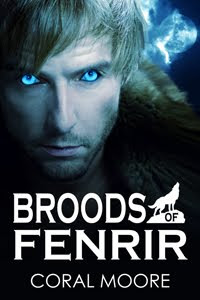 Broods of Fenrir by Coral Moore

Shapeshifter Brand Geirson was raised to rule the Broods of Fenrir, but he refused his birthright. Instead, he killed their brutal leader–his own father–and walked away.

For hundreds of years he’s avoided brood society, until a werewolf kills an innocent human woman and Brand finds himself dragged back into the violent politics of the shapeshifters. When the two brood women who mean the most to him come under threat, he must take up the throne and risk becoming the kind of vicious bastard his father was, or let the broods descend further into chaos–taking the friend he swore to protect and his lover with them.

"Broods of Fenrir is an urban fantasy infused with Norse mythology, and I was quickly absorbed into a world where our present time was put on the outside of my perception.

Werewolves just the way I like them: raw, ruthless and made even more beautiful with age. Brand is a five hundred year old werewolf who doesn't want to follow in his father's barbaric steps and rule over the broods. Because there is only one way to keep control of them, and he doesn't want to submit to the savage wolf in him to do it.

But he can only avoid his birthright so long. When Alice and Dagny are put in danger by the other broods who don't mind filling Brand's shoes, he finds himself trying to get to the bottom of the threats around them. Doing such while avoiding his unwanted title only makes things more complicated--and often painful.

Brand is by far my new favorite tortured hero. His character takes you right to the edge till you're holding your breath, unsure of what he might do next. My second favorite character was Alice, as her feelings of friendship for Brand run so deep, and despite being considered weaker, she's the last one you want to make snap. All of the characters in here are exceptionally real and have something about them to love, or in the case of their adversaries, seriously hate.

Definitely recommended for paranormal romance fans who are tired of the soft and gentle versions."--Amazon Reviewer
Posted by Holly Hook at 8:00 PM